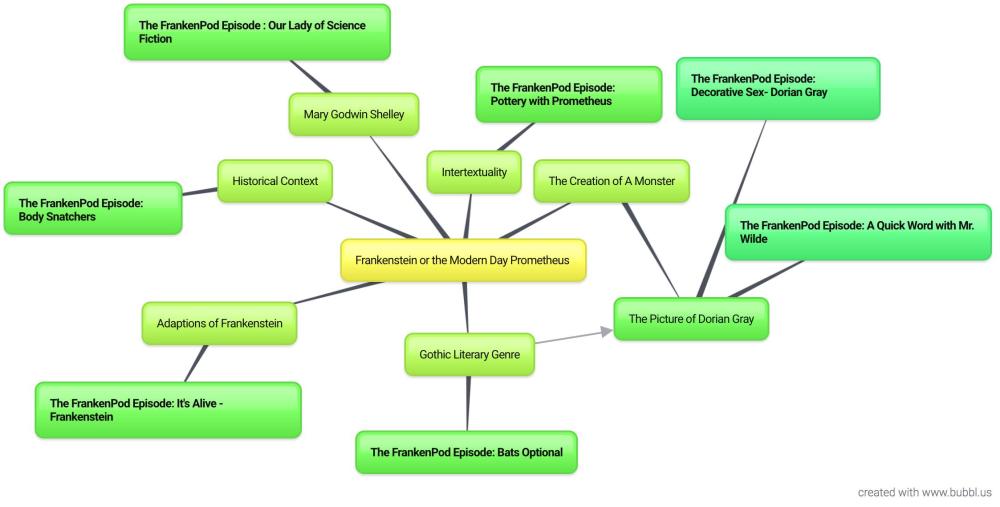 Whilst I know that I am largely doing this for my own benefit as our listenership is far from large I want to plot our meandering, rambling and somewhat overgrown path through the gothic, mystery and noir genres.

At this stage, there will be a new book/movie comparison with both Brent and I (Morgan) on the 13th of each month. Every Saturday that I can I will release a new mini (or not so mini) episode. These extra episodes offer extra information on the texts we are discussing and other topics that relate to Frankenstein and the Gothic genre.

At the moment I’m busy writing and recording the last of our Oscar Wilde episodes for the time being. Oscar Wilde has a unique place in the Gothic canon that we will probably revisit, but I think there are about 4-5 episodes in total featuring Mr. Wilde in this chunk of releases, with our second proper episode Decorative Sex 🌺 – The Picture of Dorian Gray due for release on the 13th of February. Once those are done our major focus will turn to more bloodthirsty creatures.

Our Frankenstein episodes are far from done. They will be peppered throughout the run of the podcast through perpetuity. I don’t think I’ll ever be able to say the final word on Frankenstein, but I promise I’ll try to keep the additional episodes fresh and relevant.

As for our brief foray into true crime with The Body Snatchers, there will be a couple of crime and history related podcasts, but they will usually be collaborations and they will also be linked to a Gothic, mystery of noir text.

At the moment we are firmly entrenched in the 19th century legacy in the Gothic canon. We’ll probably be in this territory for a while, however, some of this may link directly with contemporary Gothic fiction. We want to explore a few more creatures of the monstrous kind before we delve into the world of the genius detective and the hostile city.

I’m banking up readings of gothic short stories as my life is going to get very busy again as I go back to uni. Hopefully, my readings aren’t too awful.

We’ve been lucky enough to collaborate with some lovely people and podcasts. At this stage, there are 3 released collaborations:

Cult of Domesticity – FrankenCult; Mary Anne Cotton with Morgan from The FrankenPod

There are some other collaborations in the pipeline and hopefully many more to come. Please send me an email thefrankenpod@gmail.com if you want to collaborate in some way.