I’ve been slack with my updates and for that I can only apologize. Things have been hectic but mostly I have just been old fashioned lazy and not in the frame of mind to sit my arse down and write. Not writer’s block by any stretch, but perhaps writer’s faffing about. Look I’m even doing it now.
A lot of things went right with our move from Woodstock to the bunker, and a lot of things went, shall we say, less right.
First of all we gave notice on the 21st of November as planned, theoretically giving us till the 7th of December to move, that was according to our lwase, our lease that it did not dawn on either of us had expired. So we were obliged to give 3 weeks notice instead of 2…. bringing our final move date to the 14th of December… so far, so reasonable and more than a little dull.
But by the 12th it had become very apparent, even to us in our heightened state of optimism and denial that we were in no way ready to move yet. We had been in woodstock for just over 6 years and had done about 6 years worth of damage, not to mention accumulated 12 years worth of stuff. The real estate were relatively obliging about our shifting move date until we dropped the “um yeah so we might need an extra week rather than a day or two” bomb. Then things got a little tense to say the least. Apparently the owner wanted yo get in and do some (to my mind) long overdue renovations and we were the grubby, dithering spanner in the works. Finally on the 20th we shut the doors up on the woodstock place for the last time. Our first, but let’s face it, hardly ideal family home and I could not have been more over joyed to see the end to the whole stressful saga.
The slowly sinking, leaky flat with it’s stained threadbare carpets, cracked walls, slowly capsizing fixtures and multitude of perilous steps would no longer be a concern. A tremendous weight had been lifted from my shoulders and Brent had similar feelings of relief ss he handed the keys in.  Good riddance.

Enormous thanks go to:
Kat and Michael for putting us up and putting up with our comings and goings, and oodles more besides
Brent’s family for holding on to all our stuff and accepting or vague disorganization without drama. And of course for use of the ute, which might I add gave me a giggle at darker times during the move, seeing Brent driving a vehicle with bullhorns emblazened on the back.
My family, particularly my Dad for looking after the littlest one on several occaisions while I panic cleaned.
The random guy who must have kitted out his entire house with our stuff and saved us mang op shop trips.

Some quick stats
During the move we:
●Sold or gave away approximately 25% of our stuff to individual people
●Donated at least 40  garbage bags of clothes and household items to charity.
●Took about a literal tonne of rubbish, both sorted and unsorted to the Albury tip.
There is no possible way any family of 4 ever needed this much stuff. Let’s hope we never get this bogged down with “things” again.
We have scaled back dramatically but the is still more to be done.
We leave our friends bunker in 2 days but there is still more to tell. Stay tuned for the next installment. 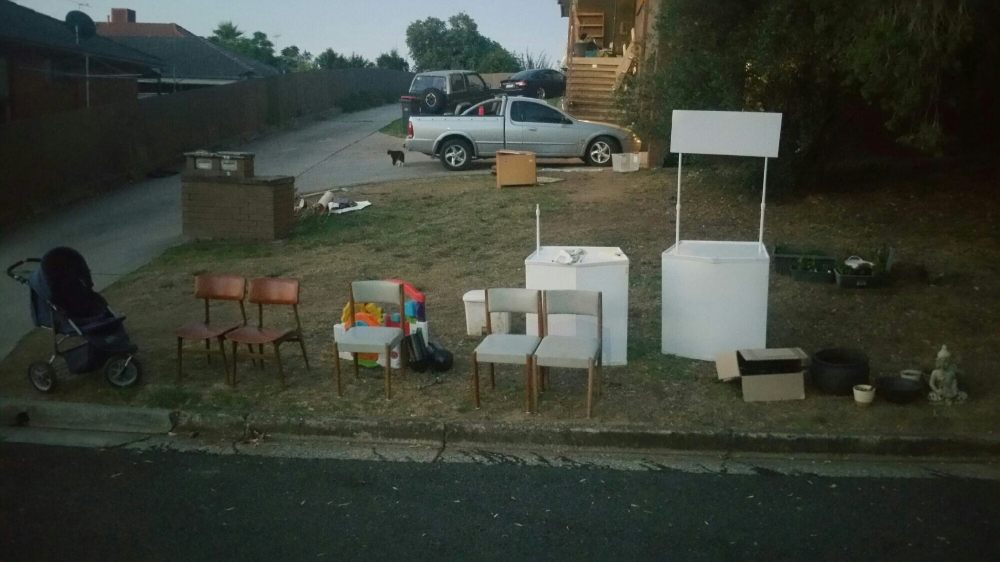